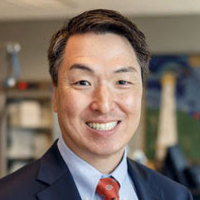 Jay Rhee, MD grew up in Pittsburgh, Pennsylvania and attended the University of Michigan, Ann Arbor graduating with honors in 1996 with a dual major in Microbiology and Philosophy. He subsequently attended Temple University School of Medicine in Philadelphia, graduating in 2000.

He completed his post-graduate training in Internal Medicine at Baylor College of Medicine in Houston in 2003, and a fellowship in Hematology and Medical Oncology at MD Anderson Cancer Center in Houston as well, graduating in 2006.

From 2006 until 2018, Dr. Rhee was a provider at Anne Arundel Hematology and Oncology in Annapolis, Maryland. While there, he received “Top Doc” and “Reader’s Choice” honors from the Capital Gazette as well as What’s Up? Annapolis. He also received the Spirit of Compassion Award from Anne Arundel Medical Center.

While in Annapolis, Dr. Rhee participated in numerous clinical trials including cooperative group and Johns Hopkins affiliated studies; he authored multiple articles and press publications and also served as the introductory speaker for Cancer Survivors’ Day.

He is an active participant in tumor boards and has a specialized interest in pancreatobiliary, gastrointestinal, breast and lung malignancies.

Dr. Rhee is married and enjoys tennis, golf, travel and trivia; he was a participant on the game show “Jeopardy!” in 2011 and advanced to the Tournament of Champions. He and his wife have adopted multiple golden retrievers and are avid Pittsburgh Steelers fans.